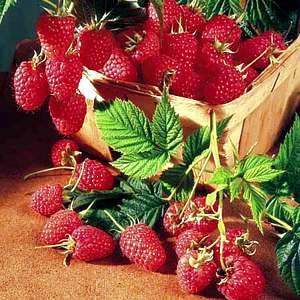 To obtain maximum yields, raspberries must be pruned properly. Pruning produces higher yields by increasing berry size. It also helps control diseases. Pruning procedures are based on the growth and fruiting characteristics of the plants.

Raspberries are unique because their roots and crowns are perennial, while their stems or canes are biennial. A raspberry plant may survive and produce fruit for many years. However, individual canes live only two years and then die.

During the first growing season, the shoots of purple, black, and summer-bearing red raspberries are strictly vegetative (non-fruiting). The following year, these same canes flower, produce fruit, and then die.

Fall-bearing red raspberries naturally produce two crops. The first crop is produced in late summer or early fall at the tips of the current season’s growth. The following year, a summer crop is produced on the lower portions of these same canes. After the second crop, the canes die.

Red raspberries produce new canes from buds located at the base of the previous season’s growth and on their roots. Because red raspberries sucker freely, they need to be confined to a 1- to 2-foot-wide hedgerow.

Black and purple raspberries produce new canes only from buds located at the base of the existing canes. As a result, they tend to remain in their original planting area. 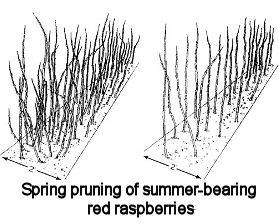 In March or early April, remove all weak, diseased, and damaged canes at ground level. Leave the most vigorous canes, those approximately ¼ inch in diameter when measured 30 inches from the ground. When finished, remaining canes should be spaced about 6 inches apart. Also, prune out the tips of the canes that have died due to winter injury. Cut back to live tissue. Maintain plants in a 1- to 2-foot-wide hedgerow using a rototiller or spade.

After the last harvest of summer, prune off the old fruiting canes at the soil surface. Remove the pruned material from the garden and destroy it.

In March or early April, remove all weak, diseased, and damaged canes leaving only the most vigorous canes. Also prune out the tips of the canes. The summer crop will be produced on the lateral (side) shoots of the remaining portions of the canes. Maintain the plants in a 1- to 2-foot-wide hedgerow.

After the summer crop has been harvested, remove the old fruiting canes and destroy them.

How to prune fall-bearing red raspberries for one crop: read more

How to prune fall-bearing red raspberries for one crop: read less

(Total crop yield is typically larger using the one-crop system instead of the two-crop system.) In March or early April, prune all canes back to ground level. This eliminates the summer crop, but the fall crop matures one to two weeks earlier. Maintain the plants in a 1- to 2-foot-wide hedgerow. No summer pruning is necessary.

How to prune black and purple raspberries: read more

How to prune black and purple raspberries: read less

In March or early April, remove all of the small, weak canes, leaving only four or five of the largest, most vigorous canes per clump or plant. Cut back the lateral branches to 12 inches in length for black raspberries and 18 inches for purple raspberries. 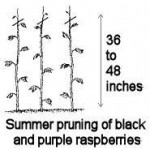 Starting in late May or when the new growth reaches a height of 36 to 48 inches, pinch out or cut off the shoot tips. Remove about 3 to 4 inches of the shoot tips. This pinching encourages lateral shoot development and increases the fruiting surface area, resulting in higher yields. Since all the new shoots will not reach the desired height at the same time, it will be necessary to go over the planting about once each week from late May to late July. Shoot tip removal can be discontinued at the end of July. Those canes that develop after July will be small, weak, and unproductive and should be pruned out the following spring.

A note—Don’t forget to fertilize your raspberries. An 8-8-8 fertilizer is a great slow-release solution. Apply at Halloween and in the spring for best results.

Our thanks to Iowa State University Extension for putting together such a clear and concise fact sheet.

Horticultural information on selection, planting, cultural practices, and environmental quality is available from your local Iowa State University Extension office and from these Web sites.

If you want to learn more about horticulture through training and volunteer work, ask your ISU Extension office for information about the ISU Extension Master Gardener program.